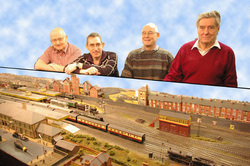 Runthorne London Road
From an article written in 2003

Many say that the Nineteen Fifties and early Sixties were the heyday of Britain’s railways when traditional railway practices that had existed for over 100 years mixed with the first of the new technologies of the second Elizabethan era.  This
layout aims to reflect the best (and worst) of that period.

Being on a cross country route, trains from all regions of British Railways can be seen, although those from the Scottish Region are rare.  A strict timetable sequence is operated which involves through coaches to and from the branch, local pick up goods, terminating local passenger trains, loco changing and servicing, as well as a selection of through and stopping long distance trains.  14 trains start each sequence and are swapped over with those in the carriage sidings and the goods yard.

The locomotives and rolling stock used on the layout are owned by members of the group and reflect their specialist interests.  Each train is as authentic as possible with the correct type of engine being used and the carriages / wagons being marshalled in accordance with period operating practices.

One train in the timetable is marked "RR" (Runs as Required) and is the path for a Special. This has been known to consist of an Engineer’s train with a new bridge girder for the replacement bridge at Stanham; a S&T department scrap train operating after the replacement of semaphore signals with colour lights further down the line;  a damaged coach being taken slowly to Wolverton for repair;  locos being towed to the scrap yard, if they are lucky they are on their way to Barry only to reappear as good as new hauling a Special on the club’s modern image layout “Hummer Road Sidings”.

Look for a number of cameos on the layout that set the scene in period.  New post-war “semis” are being built on the outskirts of the town.
These will be a bus ride from the station and it will not be long before the new owners purchase their first car.  The town’s trams have been replaced by new motor buses but a few await their fate in the small depot near the station.

The layout is built to finescale “OO” standards, that is to a scale of 4mm to the foot (1:76) and a gauge of 16.5mm.   Most modern scale models will run on this track with little or no modification but all items are detailed and weathered to improve their appearance.  Many items are built from kits or even scratch built to represent the more unusual prototypes.  The buildings around the railway were hand made to designs of the London & North Western Railway to give the layout a unified image.

To the far right of the Main Signalman sits the Branch Line signalman/driver who not only controls the branch line but also the busy motive power depot.  He is busy making sure that branch line trains run on time connecting with main line services and that through services take up their booked path on the main line.  Light engine movements are also dealt with, and spare locomotives should always be available in light
steam.

At the opposite end of the layout is the Yard Controller who receives and dispatches trains from the carriage sidings and the goods yard.  He has some free time when goods trains can be broken down, shunted in to appropriate sidings and a new train made up.  The Yard Controller also has to reverse the “special” which can be tricky, especially when the brake van needs to be shunted to the opposite end if the train.

Runthorne London Road featured in the Railway Modeller in January 1992 and other magazines.  Since then many refinements have taken place, and the range and variety of both motive power and rolling stock continues to expand.  New members are always welcome to join our team at exhibitions and at the Egham & Staines Model Railway Society club house, Hummer Road Car Park, Egham, Surrey were we meet every Tuesday evening.

The layout regularly attends model railway exhibitions around the country including the second Warley MRC exhibition held at the NEC
Birmingham in 1994.  It all fits together into 5 large “coffins” which can be transported in a Luton van.  If you are interested in having our
layout at your exhibition please speak to one of the club members. 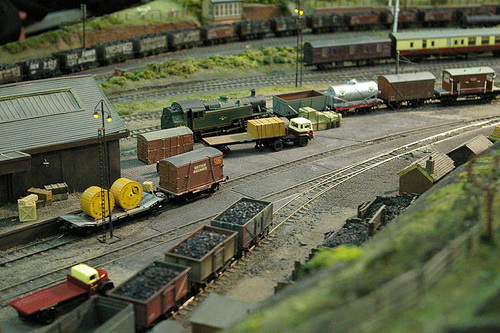