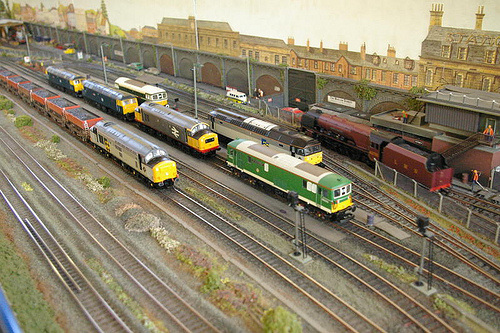 The layout is run to show a comprehensive display of 'Modern Image' locomotives and rolling stock, with the occasional 'preserved' locomotive putting in an appearance, or even a few fictional liveries.
Since the last exhibition, the 'Privatisation' of the real railway has all but been completed, with almost all the freight business being now operated by 'EWS' (English, Welsh & Scottish). Take a good look at the various different liveries on show. Has there ever been so many colours on locomotives, as there is at the moment? Our layout reflects the diversity of liveries which are out there on the real railway, some even coming through Egham from time to time!!
The layout has been modified to enable it to be operated in either DCC or DC mode, or a mix of both. A station is being added to the layout to add more interest for viewers at exhibitions. A new Control Panel has been built to make control and train movements easier .