​HO scale / 3.5mm/ft / 1:87 Canadian Model Railway
Fraser Mills is a fictitious town in the south west of British Columbia.  This is an area of many lakes and ne of the themes of this layout was the working model of a train barge.  Up until 1988 the Canadian Pacific operated the last of their train barges in this area along the Slocan Lake.
Our model showed the barge being loaded and unloaded with trains, then moving across the lake.  This section now forms part of our Carling Lake layout.
At the opposite end was another spectacular feature, Sunkist Canyon.  This is loosely based on Cheakamus Canyon on the British Columbia Railway.
On the main line, many freight and passenger trains were seen.  The through trains hauled a mixture of merchandise such as minerals, grain and forest products.  The yard also included a large lumber mill where switching (shunting) took place including interchange with the train barge.
During our display we ran trains from all regions of Western Canada plus a few interlopers from south of the border, the United States of America.  We trust that you enjoyed your trip to our Western Canada. 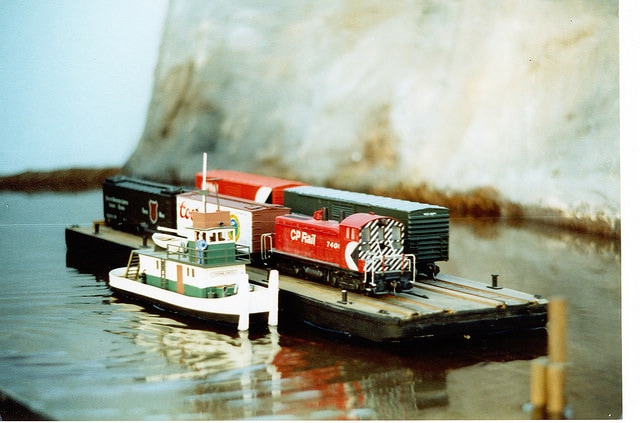 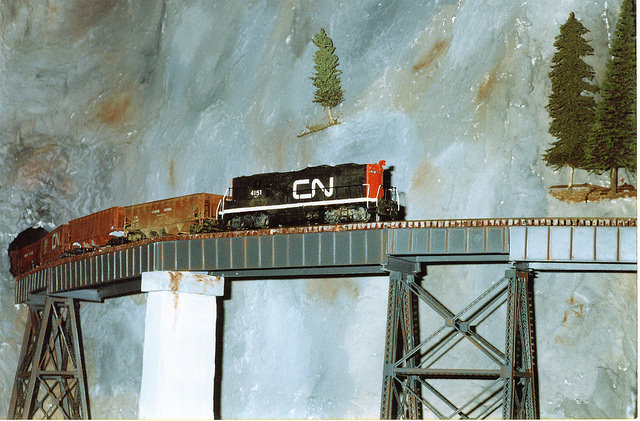