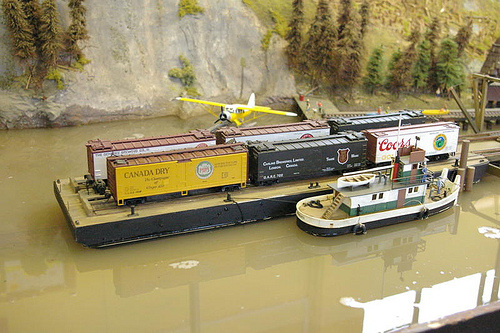 CARLING LAKE  - HO scale Canadian Layout.
This layout is the latest of a sequence of layouts that started back in 1978 with the building of our Fraser Canyon layout. The layout depicted one of the main trans-Canada lines passing through the Fraser Canyon in British Columbia and had scenery 3ft high. The layout was extended to become a double sided layout with the addition of a scenic module called Fraser Mills.
After 12 years on the exhibition circuit the original canyon section was scrapped and a new layout constructed depicting Canadian Pacific’s train barge operation with the Fraser Mills module being used as the switching yard. The main feature of the layout was the lake; this contained real water, 5 gallons, with the train barge moving through it. In it’s original form Fraser Mills was a switching layout but was soon modified to allow through running by the addition of Sunkist Canyon and a Lumber Mill module.
In due course time took its toll on the layout and its operators and another re-build became necessary.
This re-build is Carling Lake. In its present form we have retained the lake and the Lumber Mill module and built a new scenic module depicting a remote country station with a switching yard to serve the train barge and the mill. Two fiddle yards supply a selection of trains – logging – assorted freight – local passenger. Baseboards have been designed to be lightweight, rigid and for ease of assembly. All our club layouts are designed to be portable.
Real water again features in the form of a river along the length of the new module. The layout comprises three scenic modules and two fiddle yards, overall size being 6m x 3m (20’-0” x 10’-0”)