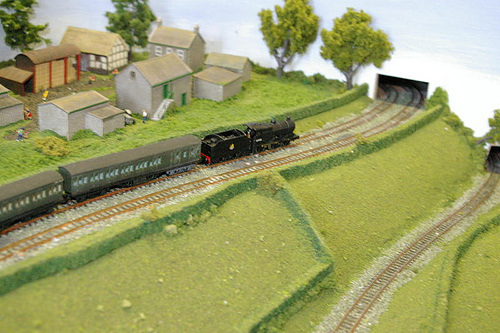 Welcome to North Somerset Viaduct as it is officially known; however, just to confuse matters it was also called Five Arches by the train crews and enthusiasts. The location is just to the west of Radstock where the double track Somerset & Dorset Joint Railway crosses the former Great Western Railway’s North Somerset branch line. Although you are visiting this exhibition in January we are planning to operate an intensive Summer Saturday service over the S&DJR s main line from Bath to Bournemouth, the former GWR branch will have its usual intermittent service.
We are fortunate in that a large number of cross-country services will pass our view point. We will see trains from places as far away as Cleethorpes and Manchester, along with services starting from slightly nearer locations such as Weymouth. Most of the trains we will see passing today cater for the holiday traffic which, in the late 1950s, is still extensive. This makes for interest in the make up of the trains enabling rolling stock of London Midland, Eastern Region and Southern Region rolling stock to be seen.
The locomotives to be seen in action will be just as varied. Our own famous eight-coupled locomotives, usually operating goods trains could be pressed into action on passenger turns. These may be double-headed by the six-coupled 4F goods engines or the Class 2P passenger locomotives. However, what we are really waiting for is to see what the Shedmasters at the motive power depots at Bath and Bournemouth have managed to lay their hands on. If last weekend was anything to go by we should see representatives of William Stanier s Black Fives and Class 8F freight locomotives (the latter not usually seen south of Bath), BR Standard Class 4s and the now famous (in S&D terms) 9Fs. The re-built Southern Region Pacifics are making their mark resulting in a decrease in the number of double-headed trains to be seen.
There is the one advantage of a day spent alongside the line here, as it is a double track section we seem to get twice the number of trains as elsewhere on the line, although this is not really the case. Inter-mingled with all the holiday traffic will be a mix of local trains and freight workings; there is after all the local community to care for  not everyone is off on their holidays. There is of course the occasional train on the former GWR branch.
Today we arrived here at the nearby Radstock station, and walked westwards to find a suitable vantage point, yet within 10 years, although we don t know it yet, we will arrive here by car to find both lines lifted and a general air of dereliction. A few more years into the future and the viaduct will be restored and used as a footpath.

Join us whilst we spend a few hours watching the action.
Egham & Staines Model Railway Society